Food for Friends is a popular vegetarian café/restaurant in Brighton. My husband and I had booked ahead (via the internet) and arrived at the restaurant at 7pm on a Monday evening. We were seated at a small table, very close to a neighbouring table occupied by a family with a toddler. It appeared that the tables were allocated in order, from the front to the back of the restaurant, so even when the restaurant was fairly empty, we still had to sit very close to another table. We would have preferred the tables to have been a little more spaced out, but the restaurant understandably wants to fit in as many customers as possible. On our table was a calla lily in a vase, and a lit candle.

To drink, I ordered a Pear Juice and my husband had the Banana and Hazelnut smoothie. Both drinks were nice, except the nuts in my husband’s smoothie just sank to the bottom of the glass. Despite the fact that everything on the menu was vegetarian, there didn’t seem to be many dishes that appealed to me. Although I am vegetarian, I detest goats cheese, and am not fond of nuts, pesto or avocado!

Eventually I opted for the Aubergine Croque Monsieur, which was bread-crumbed aubergine slices stuffed with smoked Goodwood cheese, served with spring onions and roasted garlic mash potato and parsley lemon butter and rocket salad. My husband (who also had difficulty finding something he liked the sound of) chose the Spicy Rosti, which was piri piri spiced carrot and parsnip rosti on a bed of roasted vegetables topped with spiced hummus, with Greek feta and dressed rocket and a fresh avocado and tomato salsa. Both mains were priced at £11.45, and we ordered a side of garlic bread for £2.60. Most of the items on the menu were either vegan, or could be adapted to be vegan. Despite some initial reservations (I don’t usually go for smokey-flavoured things) I really enjoyed my main. The breadcrumb coating was nice and crispy, the mash was really good. My husband enjoyed his main, apart from the avocado and tomato salsa (not so much a salsa as big lumps of avocado and tomato with a strange dressing) which got left on the plate. Neither of us were very keen on the garlic bread. The mains were not particularly big (a good thing in my view) so we had room for dessert.

For dessert, I ordered the Portuguese Custard Tart with caramel and bruleed banana, and my husband ordered the Molten Chocolate Pudding, described as ‘an indulgently gooey hot molten chocolate pudding served with homemade Baileys ice cream’. Both desserts were £5.95. My tart had a citrus flavour and was really delicious. The bananas were topped with a crispy caramel which was quite nice. The Molten Chocolate Pudding was a bit of a disappointment, since it wasn’t molten! There was no gooeyness whatsoever. It was just like a small chocolate cake, which breached the trades description somewhat! I guess the pudding must have just been a little over-cooked. I would have told the waiting staff, but my husband wasn’t too bothered. He thought it tasted nice, and he liked the Baileys ice cream.

Altogether our bill came to £44.10, but because we have a Gourmet Society Card (and had booked ahead mentioning the card), we got a discount of 25%, reducing the bill to £33.07. We were quite happy with the reduced price, but I do not think we would revisit Food For Friends again in the near future if we had to pay full price. The food was quite nice, but also very expensive, and there just weren’t enough menu options that appealed to us for us to want to go back again very soon. 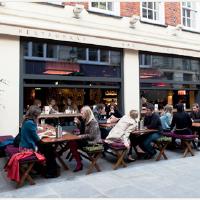 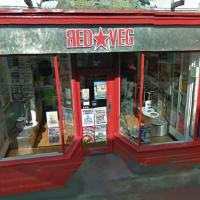 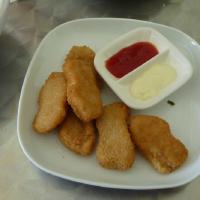 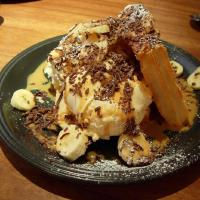 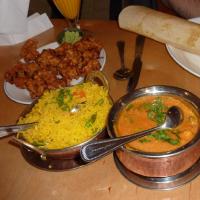